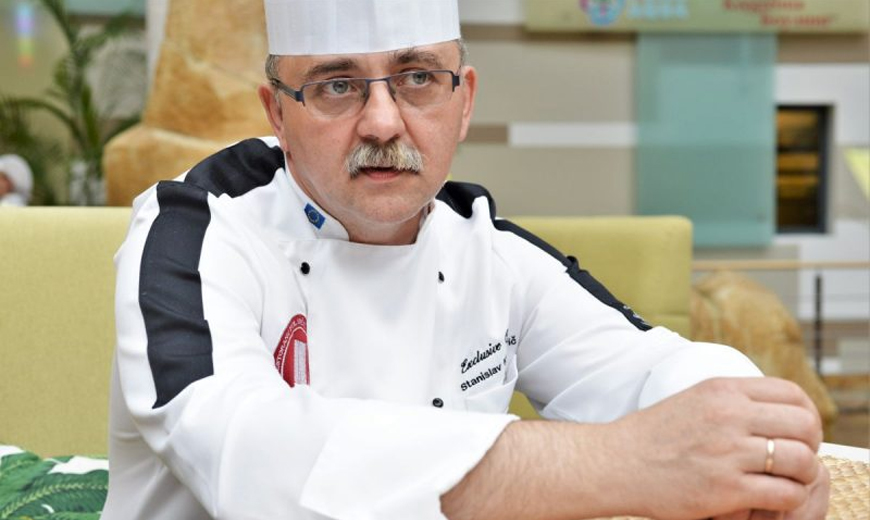 Druskininkai Aqua restaurant chef Stanislav Kizenevič’s goal is to change peoples’ opinions about what they can enjoy at a water park. This chef, who radiates modesty despite being one of the best chefs in Lithuania, believes that dreams do come true, and he invites people to experience them at the Aqua restaurant.

People who visit the Druskininkai Recreation and Health Center less often are usually surprised to see a fascinating culinary discovery instead of the fast food restaurant that they’d usually find in other similar places. Regular clients of the restaurant say that, out of all of the kitchens in Druskininkai, this one exceeds their expectations the most. Here, you can taste desserts covered in berries gathered by grandmothers throughout Dzūkija, or…

This story will stop here for now, because it’s too early to talk about dessert. We’ll sample those later. Right now, Mr. Stanislav is carefully preparing for a new day at the kitchen. “What do I know how to make the best? Hmmmm, what I know best is how to manage a team that knows how to cook well,” he says modestly. Today, the famous chef explains that he’s wanted to be a chef since sixth grade.

“In my youth, there were times when I lacked good helpers, so culinary workers who served large events often worked without counting their hours. At the time, my sister-in-law, a confectioner, worked nights, and I went to help her. That’s how I learned the basics of preparing food,” Mr. Stanislavas told us.

When he was still young, the future chef joined an ordinary culinary school, later studying at the Moscow state university. After his studies, he gathered experience in Italy, France, and Poland. Later, after his career took off, his culinary journeys took him around the world. 17 years ago, once he was an acknowledged chef, Mr. Stanislav and his colleagues established the Association of Lithuanian Restaurant Chefs and Confectioners. This national team represents Lithuania in the world Culinary Olympics every four years.

“It’s held in Germany, in Erfurt. Our team of six people presents 150 dishes of cold appetizers, 150 hot appetizers, 150 hot dishes, and desserts. That’s a total of 600 dishes. You have to cook quickly and well, and your team has four hours to do it,” Mr. Stanislav said of the Olympic competition. When asked whether it is possible to produce so many dishes well in such a short time, he said: “We spend four years training for it. If we learn a lot we can do it.”

Mr. Stanislav laughed that his dream to become a restaurant chef came true through a trick. Up until he was thirty years old, he worked as a regular chef.

“One time, I was invited to work as a chef’s assistant at the Narutis restaurant in Vilnius, which was still being established at the time. I was tricked, because from the very first day, I had to work as the head chef. That happened because the chef they chose simply didn’t show up for work,” he recalled. There, he ran the kitchen for six years, later also working at the Šarūnas hotel’s kitchen in Vilnius and the Terrazza restaurant in Forum Palace before heading to Druskininkai, where he started by working at the Vilnius SPA sanatorium’s restaurant.

“I moved to Druskininkai, but I frequently returned to Vilnius. It’s not going anywhere. The people here are wonderful, I tell you, and the forests and the nature! I enjoy life while living in Druskininkai… You can taste what grows here, it’s perfect for a good kitchen,” the restaurant chef praised Druskininkai.

When pressed, Mr. Stanislav confessed that he holds confectionery close to his heart. “In my kitchens, bread and desserts always have to be made on location. I also like to work and experiment with fish and meat, and I enjoy making some serious soups,” he explained.

According to Mr. Stanislav, a restaurant’s quality depends on quality products and on high expectations for one’s self. Technology only becomes important later.

When asked about his opinion on fast food, he said that the Aqua restaurant prepares its demi-glace red wine and beef stock sauce over three days, that confit duck drumsticks take 24 hours to prepare, and that oxtail and forest bounty soup boils for “just” 12 hours.

Meat, which includes angus beef, duck, oysters, and fresh fish, is imported from Germany, along with feta cheese. Mozzarella, parmesan cheese, Parma ham, pasta, olive oil, herbs, and fresh greens are imported from Italy while shrimp are imported from Latvia. Mr. Stanislav prepares many of his dishes at low temperatures – at about 70 degrees in a vacuum. “For fish, slow cooking at 50-60 degrees is perfect. Try leaving it at that temperature for 20-30 minutes and see how delicious it gets,” he added. The chef also recommends selecting wines from two Italian wineries with each dish.

The restaurant’s chef is glad that inspectors allowed him to buy products from local farmers. That’s why the kitchen uses fresh berries, fruit, vegetables, and cheese – all products that have been grown and ripened locally. At the end of September, Aqua’s desserts were covered in thick layers of blueberries and raspberries, freshly picked locally from the Druskininkai region. Every year, Mr. Stanislav tries to identify the best time for picking basil and makes traditional Italian pesto sauce for the whole winter.

“We pick the berries ourselves and use them to make rich sorbets and ice cream. Just like most Lithuanians probably do, we gathered mushrooms by the bucket this autumn. We’ll use the dried boletes all year,” he predicted. This autumn’s menu includes milk calf liver with boletes. The kitchen is preparing young marinated boletes and adds the mushrooms to soups, sauces, and various snacks.

“How did you like the steak? The flavour of angus beef is special because this breed’s bulls spend their entire lives lying down. I just didn’t overcook the meat. The sturgeon is a royal fish. Did you notice how well it pairs with…” Mr. Stanislav began to ask our opinion of our dinner.

His attentive glance shone out with curiosity, flickering from modesty to pride. His impressively tall chef’s hat truly seemed grand. To us, he seems like a quiet but powerful kitchen general. No, a general who makes dreams come true. As we dig in to our tartalette, covered in a thick layer of raspberries, we really, truly feel that we are alive.